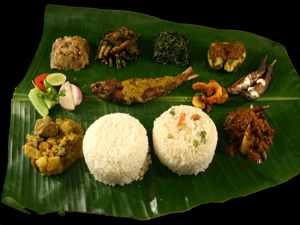 Chhena jalebi is a sweet dish originally from coastal Orissa in eastern India, a state known for desserts made of chhena. Its popularity has spread beyond coastal Orissa. It is also made in modern day Bangladesh

A paratha/parantha/parauntha is a flatbread that originated in the Indian Subcontinent. It is still quite prevalent throughout the area. Parantha is an amalgamation of the words parat and atta which literally means layers of cooked dough. In Burma, it is known as palata while it is known as farata in Mauritius and the Maldives. However, in areas of the Punjabi region, it is referred to as prontha or parontay.

Khaja is a dessert of India. Refined wheat flour, sugar and oils are the chief ingredients of khaja. It is believed that, even 2000 years ago, Khajas were prepared in the southern side of the Gangetic Plains of Bihar. These areas which are home to khaja, once comprised the central part of Maurya and Gupta empires. Presently, Khajas are prepared and sold in the city of Patna, Gaya and several other places across the state of Bihar. Khajas of the Silao and Rajgir are known for their puffiness. Khajas have travelled to some other parts of India, including Andhra Pradesh and Odisha . Khaja of Kakinada is a coastal town of Andhra Pradesh. Where as khaja of Puri is too famous. At first, the butter is of wheat flour, mawa and oil. It is then deep fried until crisp. Then a sugar syrup is made which is known as Paga. The crisp croissants are then soaked in the sugar syrup until they absorb the sugar syrup. In Kakinada, Khaja is dry from outside and full of sugar syrup from inside and is juicy.

Pakha?a is an Oriya term for an Indian food consisting of cooked rice washed or little fermented in water. The liquid part is known as Tora?i. It is popular in Orissa, Bengal, Assam, Jharkhand and Chhattisgarh. The Bengali name for this dish is Panta Bhat. Eating pakhal has been recommended to prevent heat stroke in hot weather. A traditional Oriya dish, it is also prepared with rice, curd, cucumber, Cumin seeds, fried onions and mint leaves. It is popularly served with roasted vegetables such as potato, brinjal, badi or saga bhaja or fried fish.